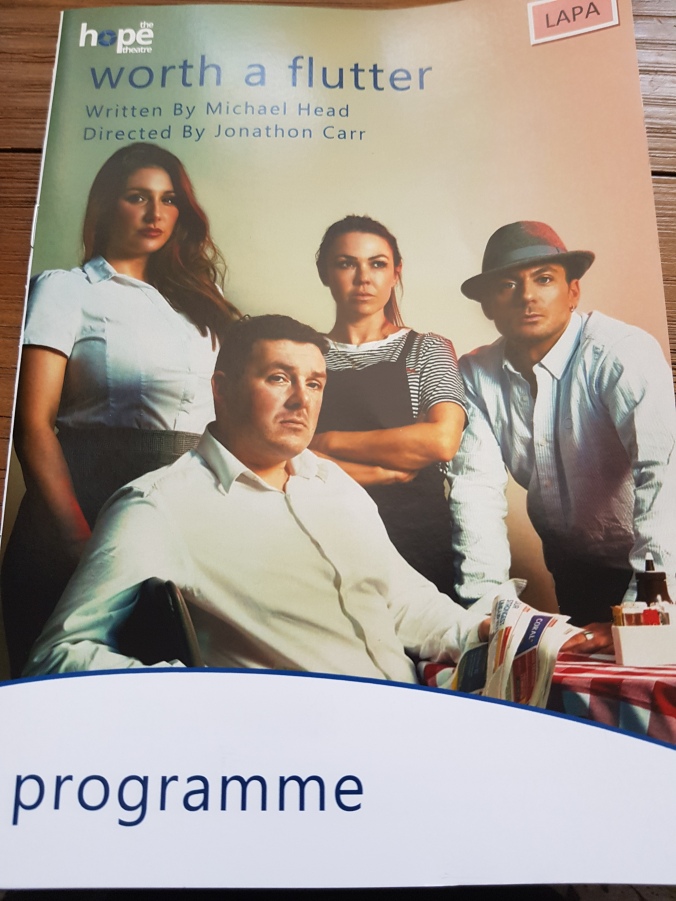 As my regular readers will know, I don’t tend to review in the traditional sense, keeping my blog focused on shows I’ve loved so much I’ve felt moved to write about them.  So I was slightly nervous when the lovely folk from LAPA contacted me and asked if I would see and review their show.  What would I do if I didn’t enjoy it? I decided to take the risk and accept their invitation, and I’m really glad I did. Spoiler alert – I enjoyed the show, and it’s one I would not have seen otherwise, so a really pleasant surprise.

‘worth a flutter’ is written by Michael Head, who also stars in the show as Matt. It opens with Matt welcoming us to his story, which is a bit of a red herring, but I won’t say too much because I wouldn’t want to ruin any surprises for those that decide to go see it.

It is a very English comedy, particularly in the first half, which has lots of silly and inventive comedy moments. Lucy Pinder, as a Scottish accented penis, is hilarious, and for me this is when she really comes into her own as a comedic actor, as there isn’t that much for her to work with as a cheating trophy girlfriend. In fact, to start with the actors jump around playing an array of comic characters with great energy and enthusiasm.  Paul Danan clearly has a lot of fun with his portfolio of mainly obnoxious caricatures. I went into the interval thinking it was a fun enough play, and the buzz of the interval audience definitely supported my reaction.

It is after the interval that the magic really happens, and the true heart of the play is revealed. Clare McNamara shines as Helen, a character whose depths are only hinted at in the beginning, but who takes centre stage in the latter half of the play. The comedy is still there (a wonderful fake boxing match adds a dose of playfulness), while the play successfully travels into more serious territory, helped by the sincerity and strength of McNamara’s performance.

I don’t want to say too much more, as I don’t want to ruin the surprises, but in the midst of a lot of delightful silliness, Michael Head has succeeded in writing an emotionally resonant play. An emotional core that lands because of the dark comedy surrounding it. Don’t be fooled by the jokes and parodies, this play has a lot to say about the damage caused by the way men are taught to treat women. A damage that is as evident in the men (Michael Head’s struggling Matt and Jack Harding’s sympathetic and conflicted Sam) as the women.

‘worth a flutter’ is running at the Hope Theatre until the 19th May.  If you get a chance to check it out, let me know what you think.  Ideally including the name you’d give your horse in the “things not to say on a first date” horse race. My humble contribution is “you remind me of my dad”

One thought on “worth a flutter at the Hope theatre”