Saturday I enjoyed my first outing to the Lion and Unicorn pub theatre in Kentish Town. A lovely, welcoming venue that I’ll definitely be visiting again, and not just because of my Camden Fringe Off-Fest assessor duties (although obviously that is a factor).  The theatre space above the pub is well laid out and a nice size for a pub theatre. The bar staff were clearly very engaged with the goings-on upstairs and us theatre travellers were made to feel very at home, as we waited for the doors to open.

JustOut theatre had two different Camden Fringe shows on that night. White Nurse and Home, and I was invited to see both.

First up was White Nurse, a perfectly formed 30 minute play inspired by the idea that we can be cured of love.  Abby Coppard (playwright) focuses in on this core idea and develops a story around it that is powerful in its simplicity.  What would you do if you found yourself trapped in a toxic relationship, but unable to stop loving your tormentor?  In White Nurse we see Layla, played by Aisling Lally, do battle with her relationship demons across the course of 8 doses of medication. With each dose we get a flashback of Layla’s relationship with Joe (played with a growing restless anger by Mitchell Siddons).

Layla is the emotional centre of the play, and she is beautifully brought to life by Aisling Lally. I couldn’t take my eyes off her, her performance was flawless. Such an exciting new talent must have an exciting future ahead of her, all being fair and right in theatreland.

While the subject of domestic abuse is core to the piece, there is no gratuitous violence, which if anything makes it all the more powerful. We see the aftermath and the build up, and by leaving the rest to our imaginations director Keira MacAlister shows she knows when to hold back in order for the play to sing.  Also having Joe prowling on stage throughout the process, observing as Layla is detoxified of her dependency on him, adds a sense of menace that sets things up for the final scene.

Rebecca McGreevy plays the titular nurse. A challenging part as she is essentially there to bring out Layla’s story, and McGreevy brings a quirky, warmth to the part.

I really enjoyed White Nurse, I’d advise you go see it, but it closed yesterday. Such is the nature of the Fringe. Well worth checking it out if it pops up at a theatre near you, and I’ll certainly be interested in seeing what Coppard, MacAlister, Lally et al do next. 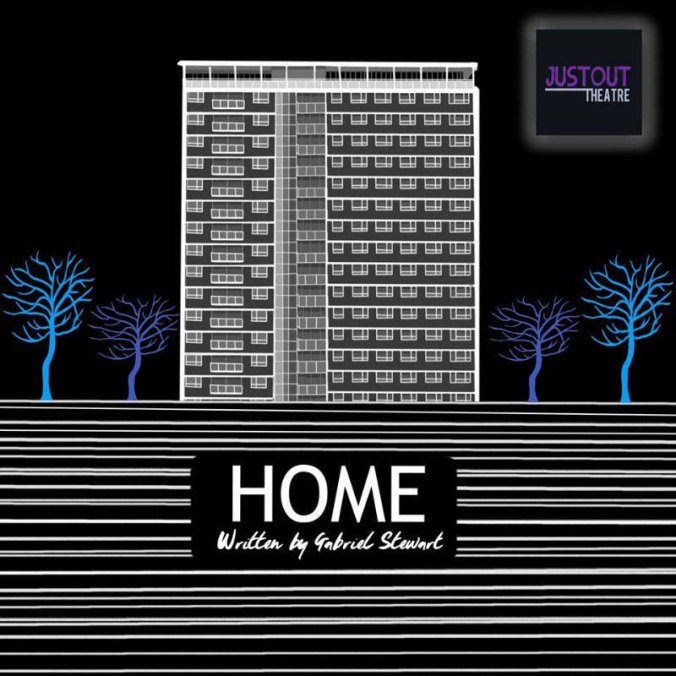 My second JustOut Theatre show of the night was the opening performance of Home, which runs at the Lion and Unicorn until 14th August.

Another original piece of writing, this time by emerging playwright Gabriel Stewart, Home is about two 16 years old trying to start a new life with their 3-month-old baby Hal. As with White Nurse, there is a clean, simplicity of focus to the play and the priority is telling  that story well.  At my performance Emily Wood stood in for Meg Ryder who is playing Shanon for the rest of the run. While I’ll now be forever curious about Ryder’s performance, Wood does an able job covering for her.

Lauren and Reece, sympathetically played by Lotty Holder and Logan Jones, are determined to set up home with their baby away from the influence of their respective families.  With Home, Stewart does not pander to stereotypes. These aren’t two pissed-off school children stuck with a kid of their own.  They both love Hal. They both want to make things work. Reece misses his mum. Lauren is scared of hers.

While there is a sense of overwhelm, understandable given their dysfunctional family backgrounds and a lack of support and understanding at their school, they are no less able than any other first-time parents. I couldn’t help wanting them to succeed, if only the outside world would let them.

Under Ben Wilson’s direction Lauren, Reece, and their fears, come to life in a convincing and engaging way.  Stewart shares just enough about their backgrounds for us to understand their situation, a good example of not over-writing but allowing the audience to join the dots for themselves. And I can’t finish this review without celebrating the use of music in the production, from foreshadowing to mood-setting, the soundtrack works in harmony with the spoken words to bring the world of Home to life.

As regards the ending, well I can’t help hoping Stewart is working on a second act for this play. While it does work as a complete piece as is, I’d love to know what happens next.