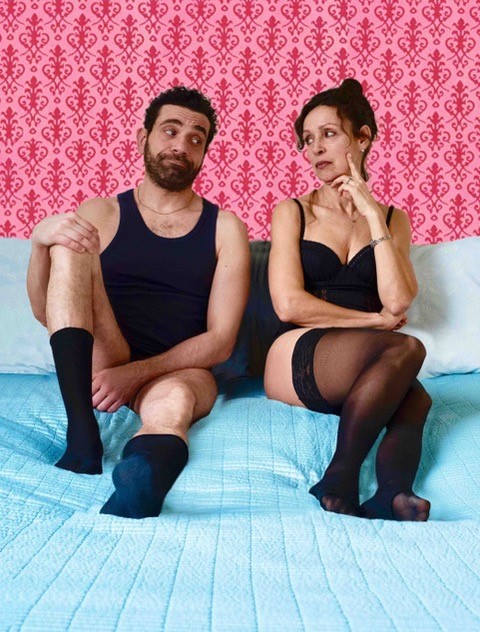 Last night I went for my first ever trip to the Canal Cafe Theatre (it’s a bit nice round there isn’t it?) to see Lost Keys and Orgasms at the Pasty motel.

Mary Jane Figtree’s play is based on the concept of an Italian 90s play called Orgasmo e Pregiudizio. With this, her first play, she has written something that succeeds in being both funny yet emotionally resonant.

Two work colleagues find themselves them having to share a room and a bed at the sleaziest motel in Cornwall.  In a room clearly designed for those with sex in mind, and with the frequent background noises of other guests making the most of the motel’s facilities, it would be fair to say that the situation is on the awkward side.

Alessandro Gruttadauria and Wanja Sellers give sympathetic and humorous performances in this fun two-hander.  Richard Heap’s sensitive direction allows the laughs to land, but not at the expense of the deeper personal stories our two protagonists share.

I really enjoyed the show, as did the rest of the Thursday night audience, given the amount of laughter we shared. There were certainly a lot of smiling faces as I left the theatre.

If you’ve never been to the Canal Cafe Theatre, it is a lovely venue and Lost Keys and Orgasms at the Pasty Motel is a great reason to go check it out.  In the current climate, a good comedy is worth its weight in gold.

Lost Keys and Orgasms at the Pasty Motel runs until Sunday 18th August.