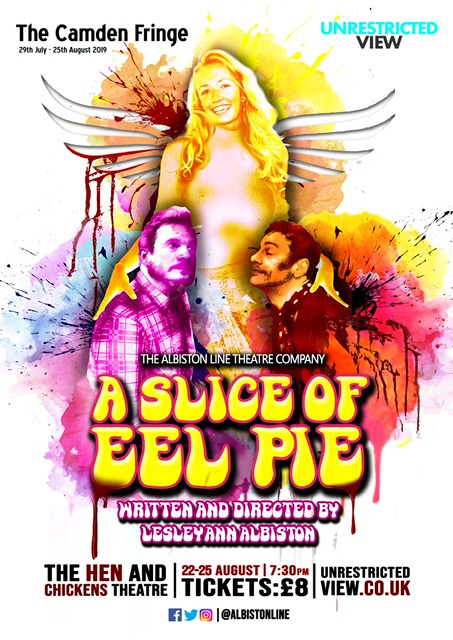 Written and directed by Lesley Ann Albiston, there is the feel of an old style British comedy to ‘A Slice of Eel Pie’. Free love, serial murder, arson, inept detectives, vengeful hippies and visitations from the dead, are brought together to create this multi-layered, satisfyingly silly comedy.

The action of the piece takes place in both modern day London and the early 70s on Eel Pie Island. While humour is the star ingredient of the play, the plot is rich enough to engage an audience throughout. The 8 strong cast clearly relish leaning into the comedy of the play, throwing themselves wholeheartedly into their roles with the energy needed to deliver some of the more absurdist elements of the play.

Neil Cole and Malcolm Jeffries sit at the emotional centre of the play, and bring a sense of depth to their roles as brothers Meatball and Pony.  There is something genuinely touching about their relationship, even as their interactions are designed to make us laugh.

Rafaela Elliston shines as the hilariously vapid yet sharp hippy earth-mother Mint Julep. I particularly enjoyed the scenes between her and Anil Desai’s opportunistic slacker Noel, who definitely believes in the ‘free’ of free love. This contrasts with Marc McCardie’s more sympathetic hippy slacker Sir Jasper, although it is hard not to be more likeable when the bar has been set so low.

Danni King and Hraban Luyat rise to the challenge of being utterly useless, and mildly baffling, as Detectives Gold and Harris. If I were a criminal I’d feel a lot safer knowing they were on the case.  There is a good chemistry between the two, so essential in landing this type of comic double-act.

I knew very little about Eel Pie Island, so I enjoyed getting a sense of the excitement and energy surrounding the community there during the 60s & early 70s.  As for the mysterious fire of 1971, well maybe it is a little less of a mystery now…

The final performance of ‘A Slice of Eel Pie’ is at 7.30pm tonight (25th August) and I’d recommend it to anyone who enjoys a good, old-fashioned, dark British comedy.