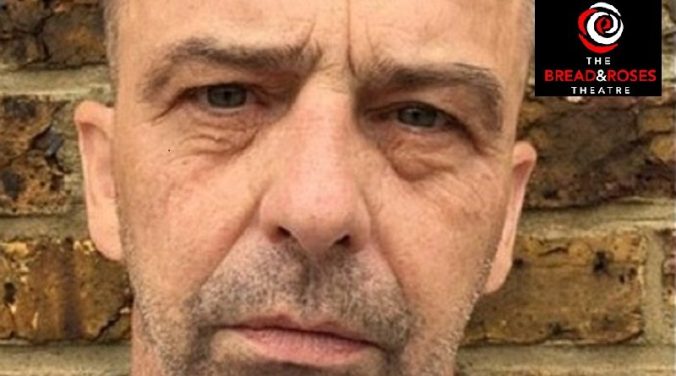 Yesterday I was back at the Bread and Roses to catch 3 very different Clapham Fringe shows. My first, in the Sunday 5pm slot was Human Issue. Written and directed by Dean Moynihan, this one man play focuses on the uncomfortable and relatively under-discussed subject of male suicide.

Starring Mark Savage (some of my readers may recognise him as the actor who played  Grange Hill school bully Gripper Stebson) as Frank, this is a challenging piece of new writing. The play opens with Frank on the verge of committing suicide by hanging. Breaking the 4th wall, Frank delays his suicide in an attempt to explain what has brought him to this point.

Frank is an unsuccessful stand-up comedian with material as stale as month old bread. This is a man who doesn’t fit easily into modern society. His narration is disjointed, which adds to the realism. Someone brought to the steps of suicide is hardly going to give a lucid, linear explanation of what brought him here. Frank admits openly to the audience, that he is an unreliable narrator. A fact that doesn’t really need to be explained explicitly, as in the true tradition of ‘show don’t tell’, it becomes very clear through the course of the play that Frank is being evasive about the real traumas he has faced in his life. Preferring to focus on anecdotes that don’t show him in the best light, but do showcase his difficulties fitting in to modern society.

Frank is not an obviously likeable character. He is problematic, sharing stories from his past in a darkly comic, unapologetic way. I think it is important to not overly warm to Frank, ensuring the play challenges the audience to feel empathy for a man who seems to lack the ability himself. There is a delicious chaos to his storytelling style, particularly in the way he veers away from the true tragedies of his life, to focus on tales of bad dates, first love and picking a fight with the school bully.

Technology is used to punctuate the performance with audio visual prompts that work as a backdrop. We also have an omniscient voice that on occasion interrupts his monologue to push him to focus on the true trauma he so obviously wants to avoid. As a result we learn about his most damaging experiences through throw away comments, as he is keen to shift his story back to safer ground.  This is man who is disingenuous in his claims of victim-hood, given his clear aversion to talking about the moments where he was at his most vulnerable, preferring to showcase stories where his own behaviour has backfired on him.

Given the chaotic nature of the narrative, the ending feels disconcertingly neat. For me the power of the play came in the fallibility and anarchy of Frank’s storytelling, so the tidiness of the ending jarred.

Mark Savage gives a sensitive performance of an insensitive man. He could have been reduced to a caricature but there is a genuine sense of pain and trauma sitting behind Mark’s interpretation of Frank.

So does Frank kill himself in the end? That would be telling and I hate spoilers. While this was a one-off performance for the Clapham Fringe, I wouldn’t be surprised if this show has a future stage life, particularly given the need for us to talk more openly about tragic prevalence of male suicide in our society.

One thought on “Human Issue at the Bread and Roses”