‘Dutchman’ at the Tristan Bates is a short play (50 minute running time) that packs one hell of a punch. Written by Amiri Baraka, and first performed in New York in 1964, this  revival is running as part of Black History Month.

From the opening scene, as our ensemble rush through a busy station, their physical interactions set the tone for the play, and establish the theme of institutionalised racism.

Cheska Hill-Wood gives a disturbingly convincing portrayal of our self-confessed liar and apparent femme fatale Lula. Her body language made my hackles rise, as everything about her screams that she is untrustworthy. She brings to life the unhinged, sinister elements of this character brilliantly. I couldn’t help wondering who Lula really is, as there is something otherworldly about her. For one thing, she knows far too much about Clay, and while fans of Sherlock Holmes might assume she has amazing deductive skills, I was left suspecting she was much more than she appeared to be. She wouldn’t be out of place in a Greek tragedy.

James Barnes gives a nuanced performance as Clay.  It is his emotional journey we are here to witness and he brings Clay to life beautifully, from his initial cautious interaction with this strange, overtly sexual woman, through the unfolding nightmare ahead. In fact, even before Lula’s arrival, as he sits alone in an empty train carriage, reading his book and listening to his headphones, there is a vulnerability there, particularly as we’ve just been shown the inherent racism surrounding him.

Even when Clay turns on Lula, and becomes violent and lashes out at those around him, the overwhelming sense I had is that she is still in control. This is very much a recurring theme. Throughout the play she corrects him, as if she has pre-scripted their entire interaction, and he must toe-the-line and play his part. It is a fascinating and disturbing dynamic. 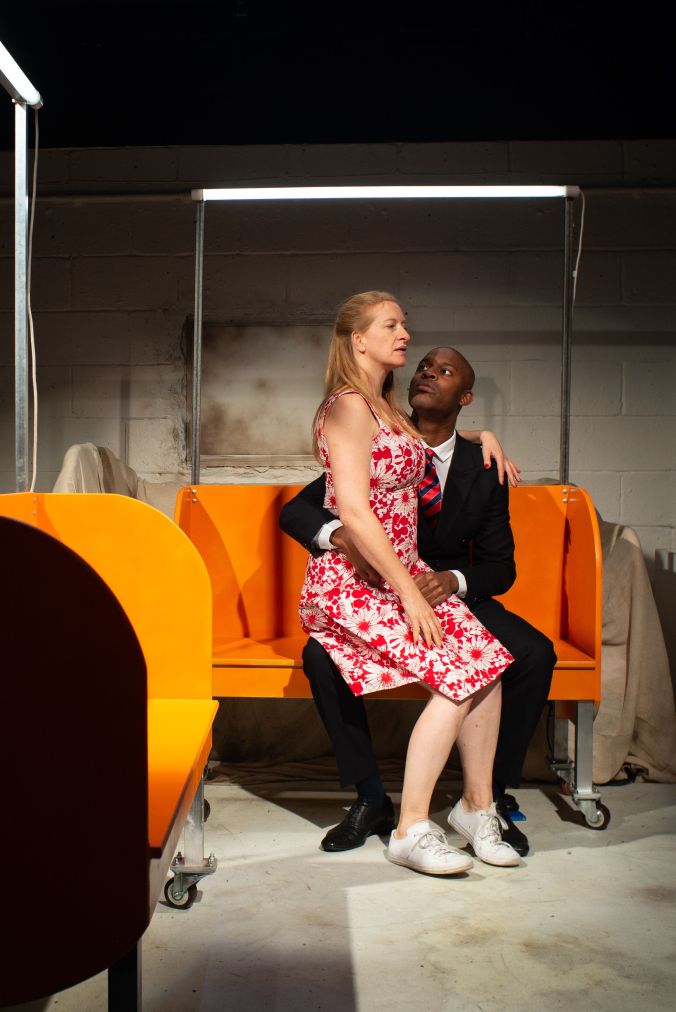 While the story of  ‘Dutchman’ focuses on Lula and Clay, the use of the ensemble powerfully lands the complicity of those who watch and do nothing, or worse encourage. There are hints of the mythic and ancient in this modern play, that give some of the more nightmarish moments a surreal edge.

Kaitlin Argeaux’  sensitive direction brings out strong performances from her cast.  This is a challenging piece rhythmically, and she succeeds in building the tension and unease to their natural and very violent conclusion.

There is so much more I could unpack from this play, but as this is a review and not a dissertation I’ll stop here.

‘Dutchman’ runs at the Tristan Bates until 26th October (Tues-Sat at 6.15pm, plus Sat matinees at 1pm)