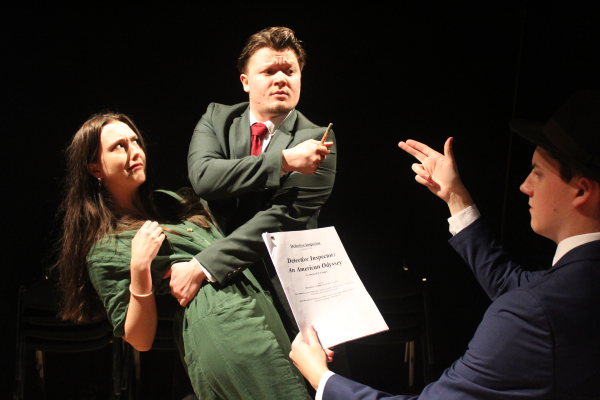 Last night I headed to the Lion and Unicorn in Kentish Town for the pure silliness that is Laughing Mirror’s Defective Inspector.

The set up is simple.  Richard P Cooper (played by writer & director Harrison Cole) is a self-important and inept detective, failed yet prolific novelist and now newly fledged incompetent playwright. With the help of unpaid drama students from the local poly he is attempting to put on a theatrical production entitled “Detective Inspector: An American Odyssey”. The one problem is having requested 20 actors, he finds himself with 2. Of course, this is not the only problem with his production…

As you might suspect, everything that could go wrong does. Harrison Cole is satisfyingly pompous and narcissistic as the eponymous Defective Inspector.  He is a terrible husband, useless father and frankly not much better as a detective, but his ego is so huge, that it doesn’t stop him dreaming big as he heads to America to make his name there.

Anna Hodgson and Daniel Hemsley play the two drama students Lisa and John who find themselves playing all the other parts (has to be 20+ parts). They bring a huge amount of energy to the show, mixed with frustration at the cavalcade of mishaps that befall them. This is a very hard working cast, and part of the joy of the show is watching them just keep going, no matter what happens, bouncing between characters and accents and prop fails.

For me, it is in the many moments where the fourth wall is breached that the comedy comes into its own. Given the sheer abundance of jokes and ridiculous situations packed into the one hour show, it is understandable that they don’t all have the space to land, but those that do are satisfyingly funny.

While I could argue that in a comedy packed, slapstick show the plot isn’t that important (does it really matter if they catch the assassin?), there are a lot of inventive and fun elements to the plot that lift it above standard spoof comedy fare. This is my first time seeing a show that includes a racist thimble, for example. Harrison Cole is not afraid to fully lean into the ridiculous, and at times surreal, with his script. Including a three-legged canine mayoral candidate as a character only adds to the bonkers charm of the piece.

Defective Inspector runs at the Lion and Unicorn until Sat 9th November, and is worth catching for those who need a healthy dose of silliness in their cultural diet.  Let’s face it, I think we all do.