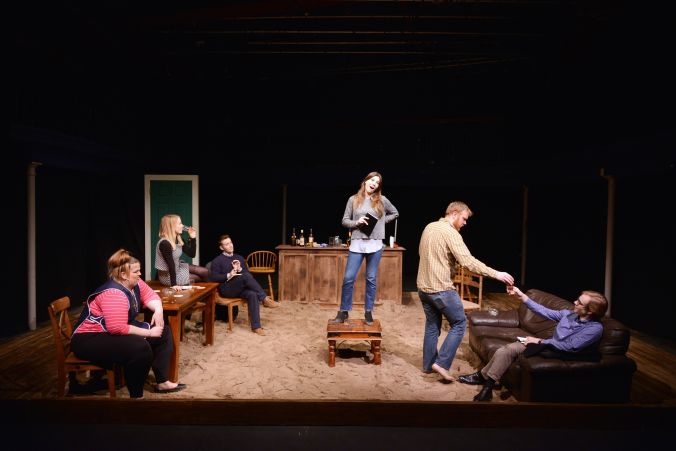 ‘For the Sake of Argument’ is a new play written and directed by Harry Darell, running at the Bridewell Theatre until 8th February. It is an ambitious if confused piece, that looks at the dangers of intellectual argument as a form of sport.  How ideas and facts, when stripped to their barest bones and used as weapons, can alienate or even radicalise.  Given the current state of the country, the battle of wits and words, vs the search for real connection with those who disagree with us, is very topical.

The piece feels overlong, particularly the opening elements. Characters are introduced, but many are reduced to caricature: the drunken landlord, the simple cleaner, the self-important intellectuals, which is very distancing.  There are elements of the opening scene that just don’t seem to go anywhere, and serve only to distract us from the more emotionally important content.  By the interval, I felt very disconnected from the story, there is only so much debating I can stomach. It felt self-indulgent and overly wordy. Yes, I know this is a play about people who love words and a good argument, but I didn’t need to witness 3 debates for that point to land.

It is in the second half that the play really gets going. We have already met Maria Bradley (a very sympathetic performance by Paula Cassina) all too briefly earlier in the play, and it is when our protagonist, Eleanor Hickock enters her world that I started to care about the story of the play. We are finally getting to the heart of the matter. As we meet the rest of the Bradley family (Matt Weyland and Harry Farmer both give strong performances), Harry Darell’s play starts to come together at both a human and intellectual level.

There are a lot of wonderful ingredients in the play, but many element fail to land. I can’t help wishing Harry Darell had brought in a director, someone to add a layer clarity and focus that would have ensured the most important threads of the story shone through. In terms of my personal highlights, there are a couple. Amy Watts’ set design is fabulous, the sand evoking both play-pit and desert very effectively. Ashleigh Cole’s Eleanor Hickock is so self-important and patronising she set my teeth on edge, her brilliant performance forcefully lands the narcissism of this central character.

Overall ‘For the Sake of Argument’ raises a number of interesting points, even if it does take a while to get going as a dramatic piece. With some tightening up, there is scope to make this a much more powerful play.