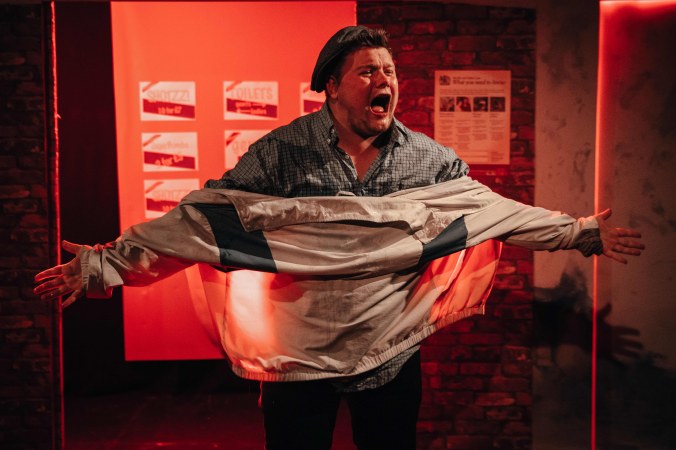 Despite the title ‘Netflix & Chill’ is not a light-hearted sex comedy. There is some sex, and plenty of comedy, but ultimately this is a show about mental health and male suicide. The comedy and the sex both ground the story in a relatable space, but also help shine a light on the negative effects of toxic masculinity.

Written by Tom Stocks, this play reflects working class voices in an honest, frank and often hilarious way.  This isn’t an issues play that bangs you repeatedly over the head with the themes, instead it shows you a snapshot of real life, which is at times supplemented by the added insight of being able to hear what is going on in someone’s head.  I found the “inner voice” voice-over mechanic an interesting one, as it works well, but you wouldn’t want to overdo as it can also distract. Tom Stocks and director Luke Adamson succeed in walking that line.

In addition to writing the play, Tom Stocks stars as Ben, a young man with a troubled family background who is trying to navigate the world. His mum has just come back into his life, a strong performance by Julie Binysh, and it’d be fair to say their relationship is complicated.  Ben works in a kitchen with archetypal lad Ryan (Joseph Lindoe), a serial womaniser who teases him about not being “one of the lads”.  Lindoe gives a wonderful performance, managing to show how inappropriate Ryan can be, while maintaining a convincing chemistry between him and Ben. You get a real sense of the genuine affection he has for Ben, even though he is crap at showing it.

Throw in Sophie (Emily Ellis) the old school friend Ben has had a long time crush on, and Jill (Charlotte Price) a moody waitress with her own parental issues, and Stocks has created a small universe of very relatable and engaging characters.  Ellis’ Sophie has brilliant comic timing, and makes a wonderful comedic duo with Tom Stocks in their ludicrously clumsy flirtation/sex scenes, which are packed with laugh out loud moments.

It is through the laughter and the banter that the struggles are brought to life. I don’t want to say too much, as there is a twist at the end which, reflecting on the show afterwards, is subtly sign-posted.  But I think laughter as a tool to engage people with difficult topics can not be under-estimated, and Tom Stocks uses it wisely here.  There are moments when Ben is roaring his pain on stage, but because he is drunk and looks ridiculous, the comedy, even though it is now pitch black, is still there.

Some threads within the play, particularly regarding Ben’s mum, remain unresolved, and the ending is quite sudden, which left me feeling a bit untethered. I think there is scope to expand the piece slightly, and give the final scene the emotional space to land. It doesn’t mean it wasn’t effective, it was, but it also felt a little abrupt and discombobulating.

All in all, ‘Netflix & Chill’ is a funny yet powerful play about mental health, self image, suicide, lad culture and the importance of human connection. The things we say to each other, have an impact. We can’t always know how someone else is feeling, because they don’t tell us, in fact this play demonstrates how it can be easier to open up to a stranger than to those closest to you. Given real world events, and one of the trending topics on twitter today (15th Feb 2020), this show is yet another timely reminder that we need to be kinder to each other.

‘Netflix & Chill’ runs at the Drayton Arms Theatre until 29th February. I think it’d be extra hilarious to see it with someone you only recently started dating. Go on, you know you want to. 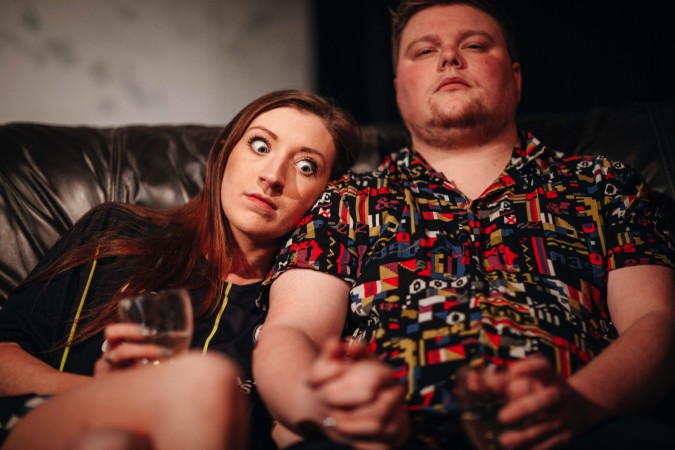